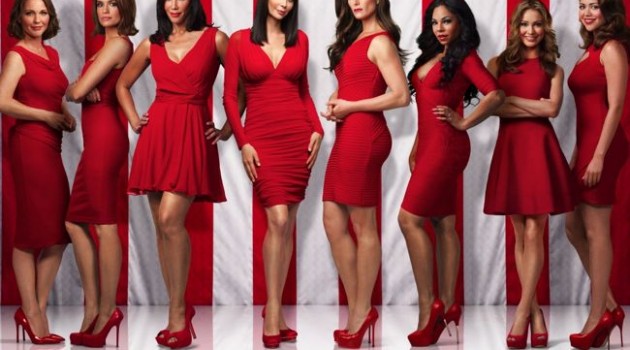 “Mistresses,” which stars Alyssa Milano, Yunjin Kim, Rochelle Aytes and Jes Macallan has been renewed for a second season.

“Bob’s Burgers” has been picked up for a fifth season. [TVLine]

Lisa Edelstein is heading to “House of Lies.”

Showtime reports, the “House” alumna will guest star in a two episode arc on the comedy “House of Lies.” Edelstein will play Brynn, a smart and sexy political consultant whom Marty (Don Cheadle) encounters on one of his assignments.

“One Tree Hill” alum Chad Michael Murray will appear in multiple episode arc on “Southland.” Murray will Dave Mendoza, a likable cop who’s a “bit of a loose cannon.” [TVLine]

Marin Ireland (“Homeland”) will play Amanda, a “sweet and fragile woman” on “The Following.” [THR]

Mark your calendars people! Kiefer Sutherland’s new drama “Touch” is moving to Thursday nights. The show will air right after “American Idol” beginning March 22 at 9 p.m. EST. This means “Bones” will air on Mondays starting April 2 at 8 p.m., while “House” finishes its run at a later time at 9 p.m. EST.

Tonight, Lindsay Lohan will host “SNL” for the fourth time with musical guest, Jack White. Here is the promo…

…Lucy Liu was only signed on for a season of “Southland.” It does not look like she will be returning next season. Also, James Spader is leaving “The Office,” season 8 will be his first and last season on the show. Meanwhile, Zachary Quinto, Jessica Lange, Sarah Paulson, Evan Peters and Lily Rabe will all return for another season of “American Horror Story.”

“Q’Viva! The Chosen” a show by Jennifer Lopez, Marc Anthony and executive producer, Simon Fuller premieres tonight on FOX at 7 p.m. The reality show follows Jennifer Lopez and Jamie King as they travel to 20 countries in search of the best Latin performers.

Hello guys! Atawewe here with your TV News update. I have some good news and bad news. Let’s start with the sad news.

Yup! You guessed it. The TV show “House” will not be returning for another season. Season 8 will mark the end of our (excluding my sister) beloved, “I do not give a shit,” Dr. Gregory House. It was with great regret that FOX’s President announced this news on Wednesday. It has been a great ride for “House,” winning a lot of awards and staying relevant for 8 seasons is no joke. Say goodbye ‘House” fans, this will be the last season of your favorite show. I’m glad the show is ending in its prime, are you? Are you sad, happy, or indifferent about this news?

The long awaited biggest night in the music industry, the 54th Grammys Awards show will be live this Sunday. Chris Brown, Rihanna, Coldplay, Adele, and Katy Perry are some of the artists performing this year. Alicia Keys will be joined on stage by Bonnie Raitt to honor the late “At Last” singer, Etta James. Jennifer Hudson will pay tribute to Whitney Houston, who passed away last night. Music biggest night airs on CBS this Sunday at 8/7 c! Are you looking forward to the show as i am?…

…due to the Grammys, “The Good Wife” will return next Sunday. Tune in to find out if Will will be disbarred.

Also premiering next week is The Amazing Race! Brenchel are part of the 20th season cast of The Amazing Race. Missed Brenchel? Do you think it’s good idea or bad idea casting Brenchel? Will they win the race around the World? Tune in, until then I’ll leave you with a sneak peek.

More good news, Survivor is back! Premiering next Wednesday is the 24th season of “Survivor: One World”. Will you tune in? Click here for the preview!

Great news Smallville fans, Smallville has been renewed for a 11th season on CW.

Lastly, Tyra returns with a new season of America Next Top Model. The reality series returns to CW on Wednesday Feb. 29. “Do you want to be on top?”

We can all agree that Parks and Recreation is currently having its best season ever. 😉 The surprises: the campaign, Ben and Lesile’s relationship and April little acts of kindness has made the season awesome. There wasn’t a new episode of P&R this week, but “Operation Ann,” the Valentine’s Day episode  was outstanding. Can’t wait to find out what happens in Pawnee? Visit HUFFPOST TV for spoilers!!

What premiere or premieres will you watch? Are you interested or excited about these news? Let us know, leave a comment below!