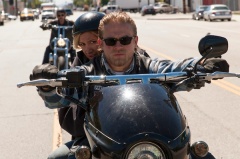 “Oprah’s Next Chapter,” which features Lindsay Lohan will air on Sunday, Aug. 18 at 9/8c.

WE TV has picked up ten episodes of its scripted series “The Divide” from “Behind the Candelabra” screenwriter Richard LaGravenese.

PBS has picked up a second season of “Mr. Selfridge,” which stars “Entourage” alum Jeremy Piven.

Colton Haynes is joining “Arrow.” The “Teen Wolf” actor has landed a recurring role on the CW drama series.

The actor joins freshman drama series as Roy Harper, a “handsome, street-savvy” teen who falls for Thea, Oliver’s sister, according to TV Guide.

In DC Comics, Roy becomes Green Arrow’s sidekick, Speedy. The character has also gone by the names of Red Arrow and Arsenal.

Hayes, who recently departed ‘Teen Wolf’ in early October, will make his first appearance in 2013.

“Pretty Little Liars” actress Ashley Benson has booked a guest role as “Barney’s ????” on an upcoming episode of “How I Met Your Mother.” [Twitter]

Billy Campbell, who played Seattle city councilman-turned-paralyzed Mayor Darren Richmond, on AMC’s “The Killing” will not be returning for the AMC series’ third season. [Variety] 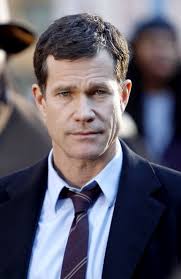 Dylan Walsh is heading to “Revenge.”

The “Nip/Tuck” alum has booked a multi-episode arc on the drama series.

“Go On” has promoted the Cat lady. Sarah Baker, who plays Sonia on the comedy series has been promoted to a series regular. [Deadline]

Billy Dee Williams (“Star Wars”) has been tapped to play himself on “Modern Family.” Additionally, Nathan Lane, who currently recurs on “The Good Wife” will reprise his role as Pepper, Cam and Mitch’s friend on the ABC comedy series. [EW]

Grace Gummer will recur in “The Newsroom‘s” second season as a reporter covering the Mitt Romney campaign. [THR]

Dean Winters will reprise his role on “30 Rock” as Liz’s ex Dennis Duffy on the series’ final episode. [Vulture]

Jeanine Mason Season 5 winner of “So You Think You Can Dance,” has been cast to recur on “Bunheads.” The dance champion will recur on the series as Paradise newcomer. She joins the series with Niko Pepaj as close, well-traveled, smart, artistic siblings. [THR ]

“Game of Thrones” is adding a drummer.

Coldplay’s drummer Will Champion has been cast in the upcoming season of the HBO series, EW reports. Champion will play a drummer in the drama series.

Aisha Tyler, the “Talk” star is heading to “Glee” as Jake’s mother. [TVLine]

Daniel Buran has been cast in “Nashville” on a recurring role. The “True Blood” alum will play Cy, the lead singer of a “Bon Jovi-like rock band.” [THR]

Gillian Vigman (“Suburgatory”) will appear on TBS’ “Cougar Town” as Mary, who is a love interest for Bobby (Brian Van Holt). [TVLine]

Bridget Regan will recur on “Beauty And The Beast,” as Vincent’s (Jay Ryan) fiancée. [TVLine]

Buckle up for safety, because four ABC Family original series are returning sooner than you think.

The cabler announced today, its winter premiere dates of “Switched At Birth,” “The Lying Game,” “Bunheads” and “Pretty Little Liars.”

After its forthcoming Halloween special, which airs Tues., Oct. 23 at 8 p.m. ET, “Pretty Little Liars” will return for the second half of its third season on Tues., Jan. 8 at 8 p.m. ET. The forthcoming episodes will pick up when Mona has been released from Radley and is headed back to Rosewood, much to Aria, Spencer, Emily and Hanna’s dismay.

“Switched at Birth” second season premieres Monday, Jan. 7th at 8 p.m. ET. “This season sees dramatic changes in the lives of the Kennish and Vasquez families as a result of the verdict in the baby switch trial.”

While “Bunheads” returns with all-new episodes on Monday, Jan. 7th at 9 ET. The upcoming episodes will pick up a couple of months after Michelle has left Paradise to try and return to her former life in Las Vegas.

Lastly, “The Lying Game” season 2 will debut on Tuesday, January 8th, 9 p.m. ET. The saga will continue as Rebecca, Sutton and Emma’s birth mother “lures Sutton into her plans for the Mercer family. Emma grows closer to Thayer, while still being drawn to Ethan, who has started to reconnect with Sutton. Kristin feels betrayed after Ted came clean about his long ago affair with Rebecca, but Ted might be hiding even more shocking revelations. And Mads connects with a mysterious new guy in town who brings a whole new level of secrets with him.”

According to THR, Boyd is set to play Kase, a brilliant math and algorithm researcher. Kase is also Calvin’s confidant (Lukas Haas) and college friend. Meanwhile, Rao, will guest star as Vikash Nayar, a wealthy shareholder at Aster Corp.

Abby Elliott first post “SNL” gig is CBS comedy “How I Met Your Mother.” Elliott has been booked as crazy Janeane in a multi-episode arc. [EW]

Tom Bower (Die Hard 2, The Waltons) has been cast to play Dwight’s great uncle Heinrich in “The Office”‘s spin-off, “The Farm.” Heinrich is described as “charming, greedy and manipulative.” [Deadline]

Miley Cyrus is set to appear in a two-episode arc on “Two and a Half Men.” Miley will play Missy, a love interest for Jake.

Bailey Buntain (Bunheads) will be guest-star on an upcoming episode of  “The Middle.” Buntain has been cast to play Jenna, a freshman Sue chooses to mentor. [EW] 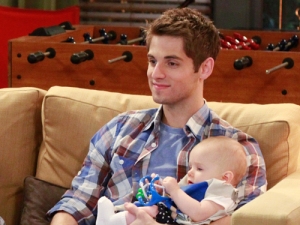 Abc family picks up more episodes of “Bunheads,” and in addition renewed “Melissa & Joey,” “Switched at Birth,” and “Baby Daddy.” Meanwhile “Jane By Design” has been cancelled.

Kate Juergens, executive vice president, Original Series Programming and Development, ABC Family, said in a press release: “I’m so pleased to add more ‘Baby Daddy’ and ‘Bunheads’ to our lineup, …So many returning originals spotlight how well our programming resonates with our audience. It also furthers our promise to continue to deliver programming that is engaging, optimistic and relatable.”

This means Monday’s episode of “Bunheads” will be a summer finale. The hit drama series and “Switched at Birth” will return this Winter.