CBS announced today the eleven teams that will race around the world on “The Amazing Race.”

Joining a pair of Chippendales dancers, a double amputee professional snowboarder, a member of the White Lion and Megadeth are the famous Fabulous Beekman Boys.

There is a twist this season. Did we mention the grand prize of the race is $2 million?!

Check out the cast and watch the promo below. 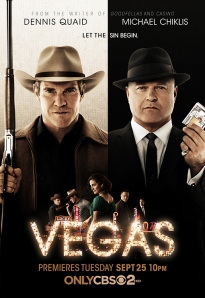 Vinessa Shaw and Michael Wiseman (The Closer) have been cast in the ’60s mob crime drama, Deadline reports. Shaw (3:10 to Yuma) will play Michael Chiklis’ wife.

Rusty Coones will play Quinn, the nomad president who has been mentioned since season 1 of “Sons of Anarchy.” [TVLine]

“Lost” alumni Jorge Garcia is set to guest star in “Once Upon A Time.” Garcia has been booked to play ‘The Giant.’ [EW]

Kelen Coleman (The Newsroom) has tapped to recur in “Hart of Dixie”‘s second season. Coleman has booked to play Presley, a pretty but tomboyish love interest for George. [TVLine]

“You are fighting a lot more than I would’ve thought possible.”

It seems Walter might be in a bit of trouble in the forthcoming season of “Fringe.” Take a look at the promo below.

“Saturday Night Live” will kick off its 38th season with Seth MacFarlane, the creator of “Family Guy” as its host. The Emmy Award-winning comedian will host the comedy sketch with Frank Ocean as the musical guest.

Additionally, Joseph Gordon-Levitt (The Dark Knight Rises) will return to host “SNL” for a second time on September 22, with Mumford & Sons making their musical debut.

Daniel Craig, aka James Bond is scheduled to host the comedy series on Oct. 6. Mr Bond will be join by Muse.