Three series regulars are joining BET’s “Reed Between the Lines.”

Additionally, Alex’s friend Simone Winters will be portrayed by Michole White.  Winters is a single doctor, who is sick of hearing how she intimidates men.

“Reed Between the Lines” returns next year.

Tina Majorino will guest-star on Abc drama “Grey’s Anatomy.” The “Veronica Mars” alum will play an intern named Heather at Seattle Grace or at another hospital. [TV Guide]

‘Grey’s Anatomy’ Season 9 Spoilers: Avery, Alex Stepping Up, Cristina and Owen Getting Back Together?

David Alpay (The Borgias) has been booked to recur on “The Vampire Diaries.” Alpay will play Shane, an attractive and charismatic Professor. [TVLine]

Jeffrey Nordling (24) has been tapped to guest-star in an upcoming episode of “Necessary Roughness.” The “24” vet will play Glen Purlman, a media relations guru. [TVLine]

Abc has recast Emily’s mentor on “Revenge.” The role which was previously played by Hiroyuki Sanada will now be played by Cary-Hiroyuki Tagawa (Heroes). [TV Guide]

John Benjamin Hickey (The Big C) has booked a major recurring role on “The Mob Doctor.” Hickey will play a U.S. attorney, who is the father of Zach Gilford’s doctor character. [THR]

Jordan Masterson has been cast as Kristin’s baby daddy on “Last Man Standing.”  The role was originally portrayed by Nick Jonas. [TV Guide.com] 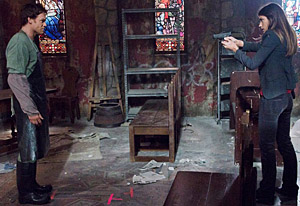 Hmm, the trailer sure hints at the possibility. Following the intriguing teasers of ‘Dexter’, a more detailed and dark trailer was released today.

The trailer reveals Maria LaGuerta is not the only cop hot on Dexter’s heels. “It’s the same amount of plastic wrap, the same positioning,” Deb says of the Ice Truck Killer case.

Take a look at the trailer above.

The CW unveiled posters of its three new drama series.

With a tagline ‘Practicing Medicine. Working on Life.’ I wonder how daring “Emily Owens M.D.” will be.

Take a look at the posters below.