Ann Curry has been replaced by Savannah Guthrie, as Matt Lauer’s co-anchor on the “Today.” Watch her tearful goodbye below: [TIME]

The eight season of “Dexter” will be its last. The executive producer, Sara Colleton confirmed the news in an interview with TVGuide.

Matthew Gubler will continue to star as “Criminal Minds‘” Dr. Reid…for two more years. The actor recently signed a two-year deal with CBS, according to [TVLine]

USA network has ordered the series, “Graceland” from the creator of “White Collar.” [EW]

Elle Macpherson is out of “Fashion Star” as host. [TVLine] 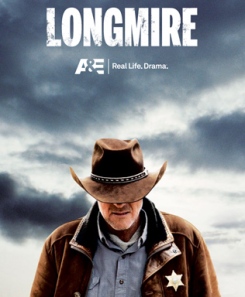 “Longmire” is a modern-day western drama, which follows a recently widowed sheriff and his deputy, Victoria Moretti, as they solve  gruesome crimes, in Absaroka, Wyoming.

Who thought a Western drama could be so catchy and entertaining?

Walt Longmire (Robert Taylor), is a recently widowed Sheriff in Absaroka County, Wyoming. Due to his loss, Longmire gave up on everything. But with the help of his new deputy Vic (Katee Sackhoff), and best friend, Henry (Lou Diamond Phillips), Walt decides to reclaim his life – personal and professional one dead body at a time.

However, Walt’s job might be in jeopardy when he realizes his obnoxious deputy Branch (Bailey Chase) is running for Sheriff. Walt Longmire, who picks up litter and cries when informing a next of kin a loved one is dead is not giving up without a fight.

It is apparent Longmire hasn’t moved on. He still listens to his wife’s voice on their answering machine. Walt hasn’t even buried her ashes (talk about issues!)

It is pure Western. All Cowboys, trucks, guns, and Horses.

Katee Sackhoff. A villain in the eight season of “24.” I’m glad she is back on my screen. Her role on “24” might seem similar to “Longmire,” but Victoria is not keeping secrets like Dana did (well we do not know yet). Victoria is a new deputy in town, who recently moved form Philadelphia. Her friendly chemistry with Longmire is refreshing. Vic understands Longmire better than the other deputies and his family. Aside from his best friend, Henry, Vic tries to pull Longmire from his depression.

The crimes are solved differently from other crime dramas. The murders/homicides are solved with “street smart.” Walt Longmire does not rely on back up or forensic ballistics to help him solve a case. He knows if a gun was fired by simply inspecting it. The series suggest that a crime can be solved by knowing your guns, calibers, and people.

Unlike other crime dramas, Longmire does not have/use a cellphone. Yet this doesn’t stop the Sheriff from solving the crimes or communicating with his deputies. Longmire relies on his radio to communicate with his office, which is very old school like.

Although, the Sheriff is best friends with an Indian, the Tribal Police living on the Reservation do not share Henry’s feelings. There is resentment and conflicts when the two police departments meet. The Sheriff loves the Indian culture and follow most of their way of life regardless of how the Indians feel about him.

Longmire was having a shower during the opening scene of the series and the wounds on his back revealed he has a secret which Henry can not share with Longmire’s daughter, Cady (Cassidy Freeman). Viewers are left wondering how he sustained those injuries. And the obvious question, how did his wife die?

“Longmire” is a refreshing, and promising thrilling drama. The series currently airs Sundays, at 10/9c on A&E

TNT has ordered a fourth season of “Rizzoli & Isles.”

“Anchoring a new night in its third season, Rizzoli & Isles has proven itself to be a strong and enduring hit, not only in terms of the great storylines and performances, but also in terms of the show’s stellar ratings,” said Michael Wright, president, head of programming for TNT, TBS and Turner Classic Movies (TCM). “We’re thrilled that Rizzoli & Isles will continue to be a vital part of the TNT lineup.” “Dallas” follows the Ewing family has they “take ambition and deception to a new level.” The drama is a sort of continuation of Cbs’ soap opera, “Dallas.”

“Dallas has been a success for us on every level: pitch-perfect writing, smart directing and buzz-worthy performances by a new generation of stars and their iconic counterparts,” said Michael Wright, president, head of programming for TNT, TBS and Turner Classic Movies (TCM). “With Dallas‘ top-flight ratings, robust growth through time-shifted viewing and the extensive online buzz, it’s clear the Ewings of Southfork have once again captured the imagination of viewers.”

The 3rd season premiere of “Covet Affairs” is right around the corner.

According to the trailer below, a major character is going to die. But who will it be? Find out Tues., July 10 at 10/9c on USA.

CW has revealed its fall premiere dates for its returning and new series. All series do not return until October.

Rounding up the list is Tyra’s reality series, “America’s Next Top Model: College Edition,” and “Nikita” which are set to premiere Friday, October 19.

The network’s most anticipated “Sex and the City” prequel, “The Carrie Diaries,” and “Cult”  debut midseason.

Read the schedule below:

The chase is on.

FBI Agent Collins seems determined to hunt Neal down in Puerto Rico. Watch the trailer below:

The fourth season of “White Collar” premieres Tuesday, July 10 at 10 ET on USA.

Nathan Lane joins the cast of “The Good Wife” for season 4.

Lane will recur as a “bottom line-obsessed manager imposed on Lockhart & Gardner by the bank to cut costs.” Lane’s arrival will disturb the partners relationships – mostly Will and Diane, and will help get the firm back in financial shape.

Lane casting comes in the wake of “ER” alum, Maura Tierney and British actor Marc Warren, whom would be appearing in the season premiere. Maura Tierney will play a self-made billionaire, the latter will play Kalinda’s manipulative ex-husband. And yesterday Kristin Chenoweth joined the cast in a recurring role of a political journalist.

Nathan Lane will make his debut on the show during the fourth season premiere.

“Breaking Bad” casts Scottish actress Laura Fraser, reports EW. The actress will play Lydia a “former of associate of Gus (Giancarlo Esposito)” who is an important character in season 5.The trailer of “Breaking Bad” Season 5 was released yesterday.

It is official. Charisma Carpenter has been bumped to a series regular on ABC Family’s “The Lying Game.” Carpenter recurred as Rebecca (Annie) Sewell, Sutton and Emma’s mum on the series. This means there will be more deceiving and bad stabbing on the “Lying Game.” The four best friends on TBS will return for a second season.

“Men At Work” has been renewed for a season of 10 episodes. The second season is set to premiere in 2013.

The series created by Breckin Meyer stars Danny Masterson, Michael Cassidy, James Lesure and Adam Busch as four friends who work together at a magazine.

“Men at Work is a strong addition to the TBS lineup and has worked extremely well paired with The Big Bang Theory,” said Michael Wright, president, head of programming for TBS, TNT and Turner Classic Movies (TCM), in a statement. “We’re very excited to welcome the outstanding cast and production team of Men at Work back for another season,”continued Wright.

The series currently airs on TBS on Thursdays, at 10/9c.